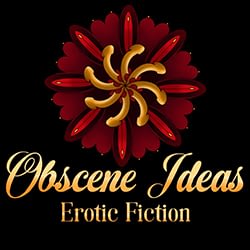 I knew he’d be waiting for me at the front door, his hands locked behind his back, his head bowed. He had failed to complete the house chores, and all because he had taken a nap! Ten minutes ago, I had texted him, telling him I’d be home soon. I couldn’t wait to punish him for fucking up.
Pulling the bag from the passenger’s seat, I slammed the door, hoping that the sound of my car would put him on alert. I took my time walking up the front steps and unlocking the door, the weight of what I had bought at Luscious Victory swinging from my left arm. My sub had never been interested in pegging, but after his ridiculous excuse earlier, I had to get this special toy.
I stepped inside. Turning to my right, I saw Dylan. His head was bowed, his lanky arms behind him, and his legs were spread. I walked past him, and placed down the bag and groceries. I then turned to face him.
“Sub, crawl to me now.” I said firmly, and I watched as he maneuvered his body in the direction of my voice.
Settling a few inches in front of me, he sat back on his heels, and I inhaled. I could smell the Dawn dish detergent on him, and I laughed.
“Oh, you tried to hurry and do the chores before I came home. You took a nap, and thought that hurrying to do them would make me forgive you? Not a chance, slut!”
I saw goosebumps rise on his arms as a shiver ran through him. He started to raise his head, but my hand came down upon his right cheek.
“Don’t even, boy!” I spat, coating my palm in saliva and swiping it across his left cheek. “To the bedroom, now!”
He whimpered, and I reached out and pinched both of his nipples with my long manicured fingernails. The hiss that escaped his throat made me smile, but he couldn’t see it.
“Y-yes, Mistress.” He gasped, and I turned my back on him to put away the groceries.

Placing the special package on the computer desk, I walked over to the bed and picked up the red wooden paddle. I wanted to cause him so much pain! Scraping my fingernails down both of his ass cheeks, I laughed as a low moan escaped his throat.
“Why are you being punished, slut?”
“Because I didn’t complete the chores in a timely manner, Mistress. I’m sorry.”
“You will be.”
Another low whimper fell from his lips, and I dug my fingernails into his ass, making him cry out.
“Fuck! Fuck!”
“What are your safe words, bitch boy?”
“Red and yellow, Mistress.” He answered as he whined.

Rubbing his ass cheeks, I smacked his left with the wooden paddle. Over and over, I hit, varying my strikes in intensity. I counted fifteen before I dropped the paddle and picked up the bamboo cane. I was a sadist, and this was my favorite impact implement.
“I want you to count the next twenty with me, apologizing after each strike. Got it, you dirty whore?”
“Yes, Mistress.” His answer was soft.

The bamboo cane in my right hand, I ran the implement across his ass cheeks and over his calves. I struck, and waited for his response.
“Sixteen. I’m sorry, Mistress.”
After the next two strikes, I rubbed his ass. I watched his arms straining against the red handcuffs, and I laughed. Caning wasn’t something that Dylan was fond of, but this punishment called for it. I expected everything done when I arrived home, and there was a pile of dishes soaking in soapy water, laundry sitting in the basket, and the bathtub still needed a good shining. I worked in customer service all day, and the last thing I wanted to do was come home to a dirty house. My sub had fucked up, and he was about to pay for it!
“I’m sorry, Mistress. Twenty!”

I heard the tears in his voice, but I could care less. With rapid succession, I caned him, his hiccups following but no words.
“Dylan, count!” I yelled, my nails raking down his ass and onto his balls.
“Aaaaaaah!” He yelled, his body lifting off the bed. “Twenty-one, twenty-two, twenty-three, twenty-four! I’m sorry, Mistress.”

His sniffles and hiccups didn’t phase me. We were almost nearing the end, and I wasn’t about to stop now. Five more strikes across the backs of his thighs, and he sniffled and cried as he responded with the appropriate words.
“We’re almost done, sub,” I told him, rubbing his back. “You’re doing so well.”

He wailed, and I allowed the cane to strike without any pauses. His cries filled the room, and I waited for him to respond.
“Thirty, thirty-one. Oh God, Mistress. Thirty-two, thirty-three. I’m sorry, thirty-four. Thirty-five. I’m so sorry, Mistress.”

Pushing the implements to the side, I told him to kneel with his ass out. I walked over to the bag, taking out the red dildo and harness. It was seven inches of silicone, and just the perfect size.
His cries had became sniffles, and I smiled to myself as I squirted a generous amount of lube into my palm. With my free hand, I massaged his now sore ass.
“How are you doing, baby boy?”
“I’m okay, Mistress. I’m so sorry.”
“Shhhh, honey. It’s okay.” I said as I ran my wet fingers down between his ass cheeks.
“Mistress?” He sounded hesitant.
“Don’t worry, love. I’ve got you.”

Silence surrounded us as his thoughts took over. I knew that he was hesitant about this, but I felt like this would bring us both pleasure after such an arduous day.
“I trust you, Mistress.” I heard him exhale, and I smiled.
“You have safe words, use them if you need to.”

I rubbed his back once more, and realizing that I was nearly inside of him, I felt my clit pulse. Pulling out and inserting it back in again, I stilled, then repeated the action. He was opening up for me, and I slid my way inside, his scream echoing around us. I moved slowly, fucking his tight little asshole and caressing and squeezing his balls. He moaned and yelled, my clit throbbing when I pushed into him. The friction from the harness was making my thighs wet with my arousal, and I moaned. I was a huge fan of cock and ball torture, so I spanked his ass while I hit his balls. Deeper and deeper, I fucked him, our moans filling the air.
“Mistress,” he gasped. “I’m so close. Aaaah, right there! Fuck! Mistress, may I please cum?”
“Yes, you may, baby boy. Let them hear you. Bust that nut for me, you filthy whore!”

This was a fun little exercise. I could see myself developing this into something much longer. Poor Dylan, haha! What did y’all think of this? ❤ 🙂